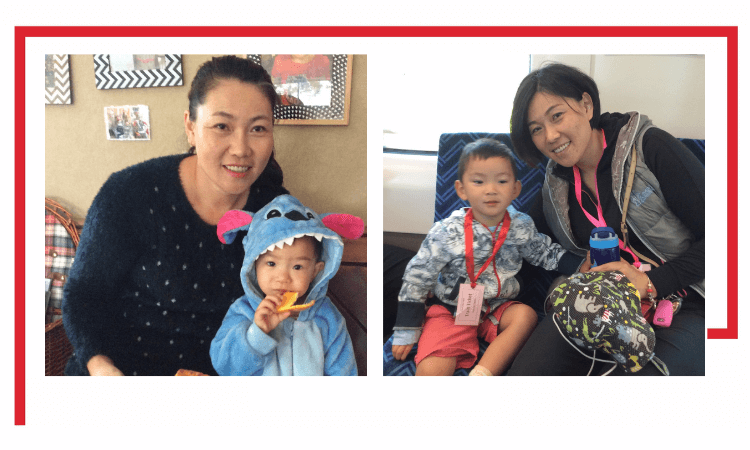 Angela and Sensen joined our centre as one of our first families, in 2017. Sensen has recently started school, and his younger brother Ryan is now enrolled with us. Angela was working when Sensen attended the centre, but needed to stop working during her pregnancy with Ryan. Now Ryan is older, she has recently completed her Level 4 ECE studies.

Ryan is very close to his Mum, and prefers his Mum to stay with him during the day. As Angela is available, we have encouraged her to stay with Ryan in the centre. They come every day together and stay until after lunch, allowing him to explore and play freely while Mum is close by.

When Angela was choosing a childcare centre for Sensen, she spent a lot of time looking at different centres and chose Lifewise ECE Glen Eden because Sensen enjoyed playing here, and she could tell that the teachers really care about the children. She could tell that the children were happy there and Sensen was happy. Angela has also mentioned how she likes that the teachers are very genuine, kind and caring teachers – all of the time, every day.

Now that Angela is spending more time with us in the centre, she has mentioned that she has been able to learn by watching and modelling what she sees from the teachers, and that has helped in her parenting journey and her ECE studies. It has been helpful to build her confidence and build relationships with other children, while her son is playing confidently. Angela shares with her friends, that the centre is like being at home. She feels comfortable to make herself a cup of tea, and being able to serve her friends when they have visited the centre also.

We love having Angela with us during the day – she is definitely part of our whanau. The children all enjoy her company and invite her into their play. Angela is joining our team of relieving teachers soon, to support her while she supports her son.

Just recently, Ryan has become comfortable with saying goodbye to his Mum, and is very settled during the day. The time, space and opportunity we have given him – showing patience and respect for his needs has really paid off for everyone. It has created a sense of belonging and secure emotional wellbeing for Ryan and has enabled success for his whole family/whanau.

Brain research tells that children need to feel connected through attachments and relationship first and foremost. When they feel emotionally secure they are able to explore and play freely. Ryan has the best of both worlds, with his whanau and ECE centre, working in partnership to best meet his needs.

At Lifewise ECE Glen Eden, we recognise and respect each child and whanau has different needs. We really do walk alongside each family/whanau to help support the best outcomes and for everyone achieve success.