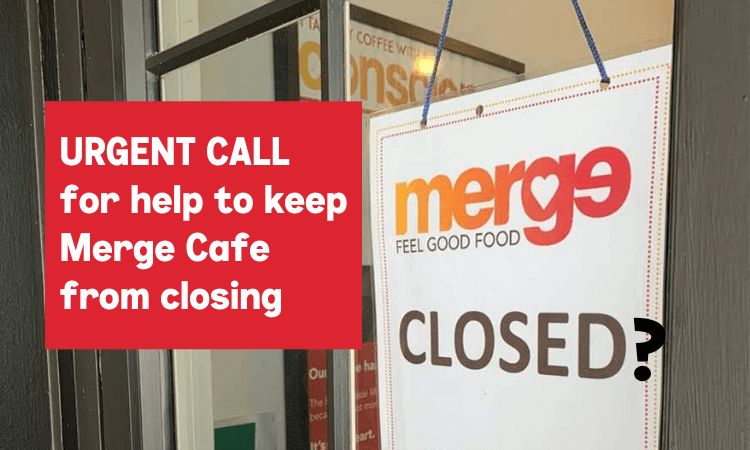 “If Merge Café shut down, everyone would be back on the streets.”

We’re used to tight budgets, but what we’re seeing now is terrifying.

Lifewise lost a major grants funder last year because of COVID-19. Since then, the number of people sleeping rough and in need of our help has sky-rocketed.

Unless we can raise $60,000 by 31 March, it looks as though we’ll have to close one of our most important services: Merge Café on K’ Road.

We really need your help, please.

Send your tax-deductible donation by 31 March and it will be DOUBLED to keep Merge Café running.

This is a lifeline for the café, and we hope it’s also an exciting opportunity for you. You get to double your gift, and play a big part in giving Merge Café a future.

Your support will mean so much to people like Richard, a lovely Merge Cafe regular. His story shows how much people would suffer if Merge Café closed.

Richard said it was really tough when he moved to Auckland 15 years ago: “I was getting a lot of “no’s” for work and started getting quite low for money. I got quite depressed.”

Determined to make it on his own, Richard kept searching for work and took any part-time job he could to make ends meet. But when some of that work dried up, his life started to unravel. To have enough money to eat, he had to stop paying rent.

“I started camping out in the parks around the city. Albert Park or Myers Park. I felt a bit safer there than on the street. I tried to get back into private housing but was always knocked back. And even if I got on a waiting list, it could have taken years to get a home.”

Richard described that time as ‘brutal’. Until he walked into the Merge Café on K’ Road, and his life began to change.

Merge Café is a safe, welcoming place for anyone facing homelessness.

It’s where Richard discovered he could get a free cup of tea, a nutritious meal and do the simple (but important) things many of us take for granted – like charge his phone.

The Café is also where people can look for a job, receive mental health support, and even get help finding a permanent home.

If it closes, where will people like Richard turn?

Donate by 31 March and your gift will go twice as far towards the $60,000 we need to save Merge Café.

You can see for yourself from the Merge Café budget above, which shows the $13k loss each month. Our team at the Café has worked hard to try to raise the shortfall through extra sales, but major roadworks along the street have kept paying customers away.

And of course, there’s the rise in house prices in Auckland which sends more people into homelessness and increases the demand for Lifewise services.

We’re used to running a tight ship and making the most of every dollar you donate. But this time, there’s just no fat to trim.

Unless we can make up this funding shortfall by 31 March, we’ll be forced to cut our services. Merge Café will have to go – which would be devastating for people like Richard.

Please donate by 31 March to DOUBLE your donation and keep this life-changing service running for people who’ve fallen on hard times.

After years fighting to survive on the streets, Merge helped Richard get his life back on track. Through Merge, Richard discovered his passion for painting, and was connected to a choir and a theatre group.

Those things gave him purpose, companionship, and a way to improve his mental health: “The groups brought me out of my shell. I went from being closed off and having a terrible chip on my shoulder to coming back and reconnecting with my family and being part of the community instead of feeling like a burden on society.”

Next, support from people like you changed his life forever by helping him find a permanent, secure place to live – which he’s since filled with his colourful artwork.

Richard has had to put on a brave face to get through all kinds of hardships. But when he told me what his new home means to him, the emotion began to break through.

“I don’t show it much but I’m really excited.

“Sometimes I don’t want to smile but I just have to, because it’s too good.”

Richard’s story proves that with support from Merge Café, people experiencing homelessness can – and do – turn their lives around.

But without this support, they won’t ever have that chance. They’ll be trapped in despair, never knowing their lives really can feel ‘too good’.

Will you please give by 31 March to DOUBLE your donation to keep Merge Café open for the people who really need it? It really could be anyone.

With the fall-out of COVID-19 and the growing pressure on housing, Aucklanders are living closer to the edge than ever before.

Even one piece of bad luck, a sick child, a missed day of work or an unpaid bill can send a person into temporary homelessness – or worse.

As Richard said: “I was just someone who’d fallen on hard times. I didn’t want a hand out. I just wanted a place to come where I felt like a human being.”

When someone reaches out in desperation, we want to make sure they have that place – where they are safe and cared for and can feel ‘human’ again.

But we can’t do that without the continued support and love of people like you.

With the future of Merge Café hanging in the balance, your support is needed now more than ever.

Send your tax-deductible donation by 31 March and it will be MATCHED, to give us twice the chance of keeping the café’s doors open.

Your gift of $100 will become $200 and you can’t put a value on the comfort and safety and hope that will bring to someone who needs Merge Café in the future.

If you walk down K’ Road today, you might still bump into Richard at the Merge Café. He’s not only there as a customer though. He’s now a peer supporter, and helps other people off the streets. Just like people like you helped him.

When someone new comes through the doors, Richard has this piece of advice:

“If you’re struggling, try to hold on and wade through those waters – because there are good people out there who want to help us.”

Will you please donate today to help people who are just barely hanging on? Right now, you have a chance to make a huge difference to their lives and futures.

You’ll make sure Merge Café isn’t boarded up when they turn up needing a warm meal, or to talk to someone, or a computer to write a job application on.

If we can’t raise $60,000 before 31 March we may have to close the Merge Café on K’ Road. Donate by 31 March and you can claim a third back in your tax deductions this year.