Time to talk about families

“CYF is gone,” said Hon. Minister for Social Development Anne Tolley according to a recent article in NZ Listener. That’s a bold statement and needs to be followed up with a clear direction that focuses on families’ resilience and wellness. And that, as we know, is about building a strong safety net that supports families so they can live well and raise their children in loving and safe environments. 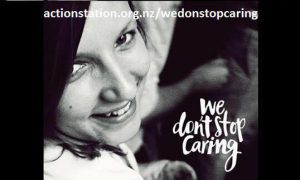 We asked the Government to raise the age of leaving foster care from 17 to 21.

When the Minister’s report on the future of child protection and care was released on 7 April, Wesley Community Action and Lifewise welcomed it cautiously. Late last year, the two organisations along with Dingwall Trust, Youthline, Child Poverty Action Group, Christchurch Methodist Mission and Action Station lobbied for an increase in the age of those leaving care. Their We Don’t Stop Caring petition was embraced by 14,215 New Zealanders.

The campaign definitely played its part in influencing the recommendations of the MSD report. But its goal was to raise the age of foster care from 17 to 21. Raising it to 18 is without a doubt a big step, but it’s not enough.

Meanwhile, the most encouraging parts of the MSD report are the emphasis on prevention and on keeping the voice of young people at the centre of decision-making. “A lot of work has been done by whanau, families, and the community sector,” says Moira Lawler, Chief Executive, Lifewise. “The evidence emerging from this must inform the work ahead.”

“Most of the children and young people we work with say they want their own families to be in their lives,” says Moira. “So the Minister’s focus on prevention is particularly welcome. Our own innovative work alongside families shows the potential to reduce the numbers of children entering the care system. We see the need for the focus to shift from making children safe by removing them from their families, to making families safe for children.”

David Kenkel (Lecturer in Social Practice at Unitec) in his critique of the report revives the unpopular topic of family poverty. Tariana Turia has talked about racist assumptions contaminating our work with Māori families. It’s clear that we, as New Zealanders, are still not getting this right.

Historically, the foster system was developed based on the assumption that children do best in families. It was a shift away from children’s homes – ‘modernising orphanages’ if you like.

Our next shift needs to seriously think through what families need to do well – secure income, healthy affordable housing, non-judgmental support, and help to connect with the community supports available to them wherever they live.

A good start would be to stop naming and shaming families who are struggling, to stop finger-pointing and blaming. Our children really are our greatest treasure. We have to get this right.