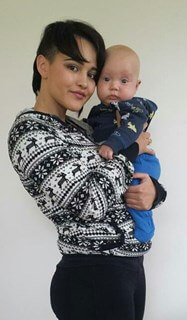 When teenaged Rika came to Lifewise, she was homeless, scared and pregnant.

It all started when Rika’s parents split up. Rika was sent to live with her Dad, who was suddenly very strict. Rika found it hard to cope with the overhaul of her home life, and she didn’t feel wanted by her mother. A young and rebellious teenager, she decided to leave home, determined to make it on her own.

She was homeless for a time, couch-surfing and sleeping in cars. But Rika wanted to make something of herself – she started studying for a certificate in Painting. Rika wore the same outfit to uni every day, and broke into the student lounge to sleep at night.

But she had to drop the course a few weeks before she was due to graduate – she struggled to do her homework on the street, and her constant hunger made it impossible to concentrate in class.

Rika tried to go to WINZ for help but she struggled to provide them with the information needed to get her entitlements. When there were no friends’ couches or cars available, Rika spent her nights at the Symonds Street graveyard – feeling very scared, and very alone.

With no money or shelter, Rika began to think that street prostitution would be the only way to get the money she needed to live.

When Rika realised she was pregnant, she saw for the first time just how desperate her situation had become. She was determined that her baby would grow up healthy and safe. She met someone who told her that Lifewise could help, and the rest is history.

These days, Rika is a loving full-time mother. She lives on Waiheke Island with her partner, where she spends her days caring for her baby son and making art. She has recently been asked to be a youth mentor in her community.

Rika credits Lifewise with giving her the opportunities she needed to get the possible start in life for her son. She has been able to work through the reasons that led her to be homeless, and she now has safety, security, and peace in her family.

She has begun making amends with her Dad, which she sees as essential now that she is a mother herself. She is confident that there will always be support from friends and the Lifewise community.

[vc_btn title=”If you want to help people like Rika get off the streets and into homes, please donate to Lifewise today and end homelessness in NZ. ” style=”classic” color=”inverse” align=”center” link=”url:http%3A%2F%2Flifewise.bronte.co.nz%2Fdonate%2F||”]