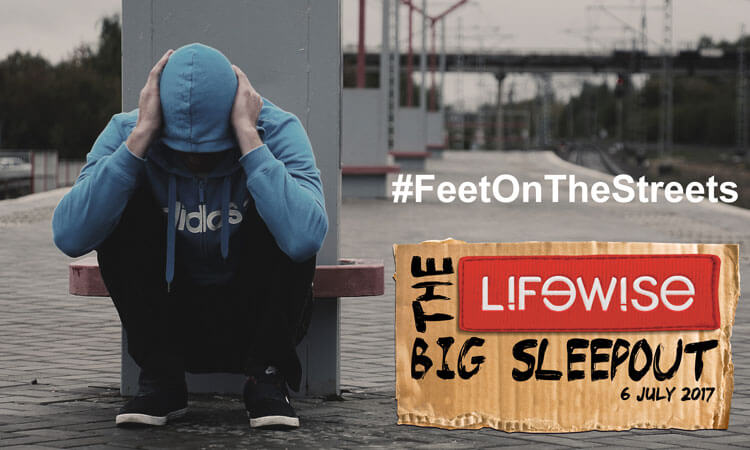 “People would walk past and say go home, stop sitting out here acting homeless,” says Lisa. “I was though, I was homeless.”

When Lisa* first met Lifewise, she’d been sleeping rough on and off for about four years. She had been placed into foster care as a young teen, and separated from her younger siblings, something she describes as being ‘pretty hard’.

She ran away from every foster home she was put in because, in her own words, “I didn’t get the nice ones”, and eventually ended up on the streets with her best friend.

When we asked her to recall her first night, she says that she and her friend just started walking along downtown Auckland until they found other homeless people.

“They gave us some blankets and let us sleep with them,” she says, “but I hid my face under the blanket that first night – I was so nervous.”

Like many young people who have spent time on the streets, Lisa soon found a sense of safety and family that she didn’t find in the homes she’d been staying.

“When I moved to the street, I felt like I was with my own family because they all looked after me,” she says. “Everyone cares about you. Everyone’s like, are you alright? Do you need some food? And they’ll go get anything that you need.”

But the dangers of street living also reared their ugly head on several occasions, as Lisa recounts some of the scarier situations she found herself in.

“The scariest moment was when we were getting chased down by a gang,” she says, “so we ran into a backpackers because we were scared for our lives, and they told us to get out. We told them we couldn’t because people were after us, but they didn’t care. We stayed though – our lives were in jeopardy, you know. Luckily when we did go, the guys had gone,”

Despite these experiences though. Lisa lights up telling us how she loved her time on the streets – especially the people that she met, and the family she was able to create. What she didn’t like though was the judgment.

“You get used to people looking at you and judging you,” she says, “but some of the things people used to say was just so harsh.”

“I would wear makeup and make myself feel pretty because I wanted to feel pretty, and then people would walk past and say go home, stop sitting out here acting homeless. I was though, I was homeless.”

Lisa’s relationship with Lifewise started at Merge Café when she was 17. It was there that she met Victoria Hearn – someone she says is “like a Mum I think, although I don’t really know what a Mum is, but I think that’s what Victoria is like. Warm, you know.”

At first, Victoria helped Lisa get access to simple things – like blankets and food – but eventually, was able to get her into a home with other young people.

As we start to talk about this, for the first time during the interview Lisa starts to look a little uncomfortable. She tells us that she moved into the unit her new home, but then she “kind of screwed it up”. She had never lived in her own place before.

Fact: More than 41,000 people in New Zealand have no place to call home.

Over half of New Zealand’s homeless are under 25.

One quarter are children.

The process of housing someone who has lived on the streets is not straightforward, and as is the case with Lisa, certain tensions can arise.

To her, opening her home to her street family – many whom had done the same for her when they had been housed – was a key priority. However, that was against the rules of her tenancy and, when things started getting broken, she found herself kicked out and back on the streets.

“Yeah, so that happened,” she says quietly, “but the next time I was given a house things were different,” She sits up a bit a straighter when she says that.

After spending some time over the summer working in a grocery store, Lisa says she was better prepared for the responsibilities of being in her home.

We ask Lisa if she is happy with life now and how thing are going.

She answers quickly “Yes, I’m happy. Things are finally looking up for me, even though I’ve started over so many times.”

The annual Lifewise Big Sleepout is on Thursday 6th July 2017. We want business and community leaders to experience one night sleeping rough, to get a taste of life on the streets, and raise critical funds to tackle homelessness. This year, the funds raised will go towards Ending Youth Homelessness.