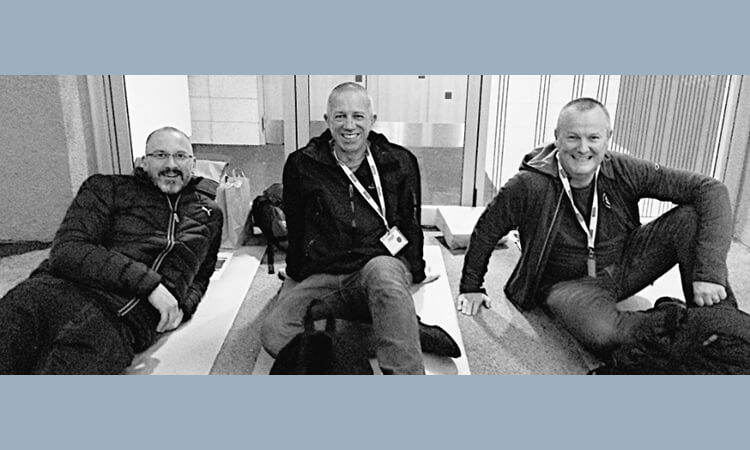 BNZ’s CEO, Anthony Healy, Director of Customer Fulfilment Services, Martin Gaskell and Chief Risk Officer, Peter Whitelaw did the Lifewise Big Sleep Out, sleeping rough for a night as part of a fundraiser to tackle the growing issue of homelessness in Auckland.

Together they raised over $8000. Donations are able to be accepted until July 14 so if you haven’t give yet, you still can.

There are more than 100 people sleeping rough in Auckland’s city centre alone, and thousands of vulnerable people living in unsafe or unsuitable accommodation. We chat to Anthony, Peter and Martin about why they did it and how they found it. #BSO2016.

So, how was your night?

Anthony: It was a small price to pay for the possibility of making a difference.

Martin: It forced us all to think about all those people out on the streets trying to find shelter for real, this night and every night.

Peter: We finally slept around 11-ish and the weather was wet and wild. But if it raises awareness and raises money then a night out in the open is worth it.  Every little bit helps.

Anthony: I think homelessness is a really important issue, particularly in Auckland, where there are growing numbers of homeless people, and not enough accessible accommodation or social services to support people and help them get off the streets. So this is one step I can take to raise funds, and raise awareness of the issue. Lifewise do a great job and they are determined to solve the issue, but they need more support and funding to make that happen.

Martin: I think it’s important that in any way we can we help to spotlight the people who are doing something about a core issue for NZ. It seems to me that Lifewise have some great approaches to homelessness and I’m right behind those.

Peter: Whilst the pressures of work and daily life can sometimes seem insurmountable, I still get to go home to a warm home and a loving family. The Big Sleep Out is a chance to show support for those whose circumstances are just not as fortunate as my own.  And to do it whilst having a nap!

You all have kids – what did you tell them about what you were doing?

Anthony: Well, I did it last year so we talked about it a lot. They think it’s pretty cool actually and they have been full of questions about what sort of people end up homeless and why. They were also worried about how cold it would be and what I will do if it rains!!

Martin: I teach my kids to help people who are less fortunate than them, but I know they won’t follow my words- only what they see me doing. Whatever I said to them about the Big Sleep Out they just said “can I come?”

Peter: I talked to them about how some people aren’t lucky enough to have a house to sleep in at night. That I and some friends (plus Martin!) were going to go and sleep out to show our support for those people and to raise money to help them.