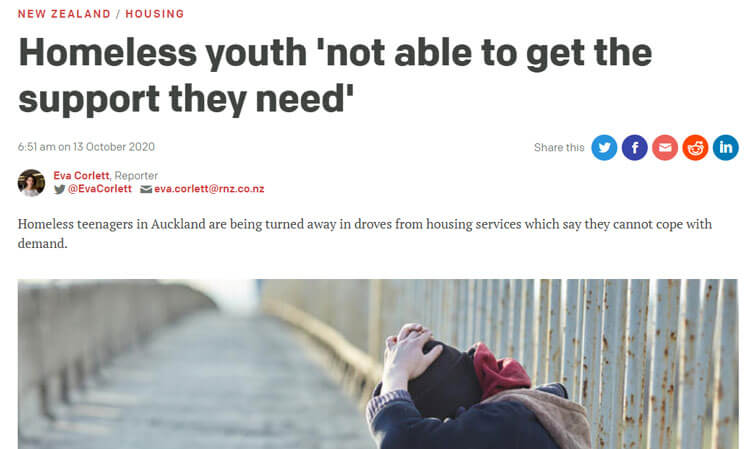 Radio NZ: Homeless youth ‘not able to get the support they need’

Homeless teenagers in Auckland are being turned away in droves from housing services which say they cannot cope with demand.

One teenager, who lived rough for nearly two years, is calling on any new government to fix policies she says forces young people on to the street.

Support workers slip in and out of the room, cooing and chatting, distracting the baby so Carla can tell her story.

She’s safe now, living in a teen parent unit and attending school. But three years ago, she was in danger.

“I was 15 and I made a disclosure about a family member. My mum and dad sent me to my nan’s but I was called a liar every day.

“So I just packed all my stuff and just left.”

“I would stay behind the community centre, behind a church, underneath a bridge, I used to jump from my friends’ houses as well.”

She said the public was either hostile towards her or didn’t seem to understand her situation.

“There was a lot of judgement towards me like ‘you’re too young, you shouldn’t be on the streets, go back home’. And I thought ‘I can’t, you don’t know my situation’.”

In those first few months, Child Youth and Family Services (CYFS) – now Oranga Tamariki – caught up with her and put her in a girls’ home.

But the home made her miserable. She felt restricted and isolated in their care. So she returned to the place she felt seen and known – her street whānau.

“They were cool, they were really supportive. I was the youngest so they always had my back and checked up on me.”

Carla said she tried to seek help from Work and Income (WINZ) when she was 16 but was denied, because she was under Oranga Tamariki care and too young to access a benefit or emergency housing.

Carla doesn’t want more young people to be turned away from help.

“That was probably the most struggle I had. Not only to get a benefit, but trying to get somewhere to stay. WINZ wouldn’t help me out with that because of CYFS.”

There are roughly 41,000 homeless people in New Zealand.

It’s hard to put a figure on exactly how many are under 25 – there’s not a lot of data. A 2013 report based off the census estimated it was roughly half.

In the past few months they’ve had nearly 120 requests for support from young people and they’ve had to turn away 89.

They could only house four. The rest, they are monitoring.

“That experience is very common if you speak to any other youth service provider or housing provider.

“They are having to turn away young people in droves because we just don’t have enough resources to look after them.”

“You can’t sign a tenancy if you’re under 18. Even in terms of getting access to WINZ, because of your age, sometimes you’re not able to get the same support as adults.”

He gave the example that during lockdown, motels opened up for the homeless, but many weren’t available to 16 and 17-year-olds.

“We had situations where young people were going to WINZ and being turned away, and having to live on the street.”

Hendry said the root causes of homelessness including poverty and housing must be fixed, but young people need better access to support.

Both The Green Party and NZ First said they would look at funding more research into youth homelessness and working with organisations already helping young people.

This news item, reported by Eva Corlett, first appeared on the RNZ website on 13 October 2020 and has been reproduced with kind permission from Radio New Zealand. Original URL: https://www.rnz.co.nz/news/national/428193/homeless-youth-not-able-to-get-the-support-they-need