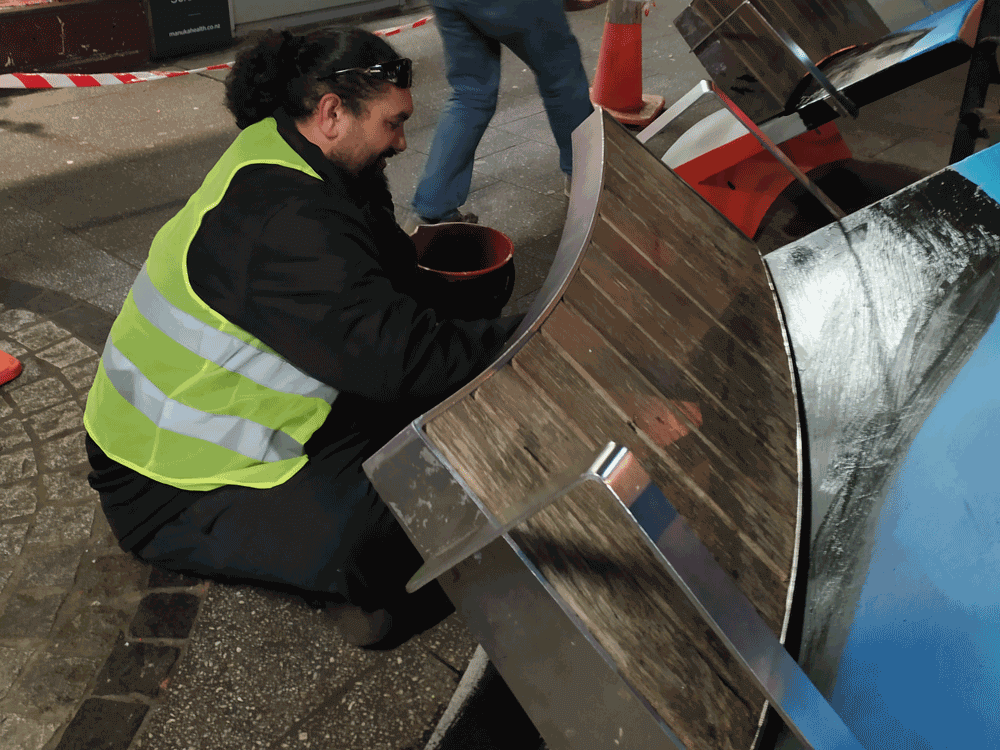 A group of talented artists who have experienced of homelessness have introduced a splash of colour by turning rubbish bins and other street furniture into poignant artworks.  Lifewise’s crew of artists from the Piki Toi collective are part of the Harunga Project who are painting K Road’s iconic concrete seats and benches.

K’ Road has always been a haven for those disenfranchised Aucklanders often living at the edge of society.  The redevelopment of one of Auckland’s most iconic thoroughfares has provided opportunities though vibrant artwork to remind residents, workers and visitors alike of the distinctive character of this part of our city.

Major infrastructure developments will change the fabric of this pulsating inner city community, whilst these changes have many benefits it is equally important not to lose the essence of what makes K’ Road so special in the hearts of many Aucklanders.

The legend of Hape whom Karangahape Road is named after is poetic as he was discriminated against himself and excluded from boarding the Tainui Waka because of his physical impediment. It is ironic and at the same time satisfying that in fact he beat that rest of his Whanau to the shores of the Manukau Harbour with the help of a string ray as the legend goes.

The seats the Piki Toi crew have painted are an homage to Hape, Karangahape Rd and the links to Ihumātao. “We’ve named our seats ‘te karanga a Hape’. The seats’ korero is about our connection to the whenua and how important it is to our wellbeing. Making this work on K’ Road has given us the opportunity to share this story with the other artists involved in painting for the Harunga project and sharing whakawhanaungatanga with other people on the street. Many of our fellow Aucklanders living on the streets are suffering as a result of deep emotional trauma often coupled with inherent addiction issues. Expression through creativity is one of the ways to encourage the healing process, in the words of one of the key contributors and agents for change”, says Piki Toi member Tiare. “We’re trying to help people be creative, release. It’s a healing agent.”

Those who have been marginalised in our society need to be given an opportunity as part of the healing process to re-engage with the wider community and be given the chance to showcase their wide array of talents. By giving these gifted individuals the chance to create something that enriches the fabric of society is something for them to be proud of which greatly increases their self-esteem and confidence.

Those living on the streets are often plagued by deep seated addiction issues, remember that addiction is a cruel disease that doesn’t discriminate whom it affects. So look past the stereotypes and remember that our street community is just like any other group of people in our city it contains a wide array of different individuals with a plethora of talents.

So the next time you are walking along K’ Road take a moment to stop, reflect and admire these labours of love produced by the talented artists in our midst who are playing an important role in enriching the unique spirit of K’ Road. helping to raise awareness of homelessness so that we can create a fairer society for all where homelessness is a thing of the past.  And remember the story of Hape who was discriminated and isolated because of his physical disability but he showed those who sort to keep him apart from his peers that with strength and determination people can overcome prejudice.

Curated by Ahlia-Mei Ta’Ala and Momoko Burgess, the project is being supported by the Karangahape Business Association (KBA) and Auckland Council.

“This project is part of a plan to liven the streets while the infrastructural projects are ongoing,” Michael (Richardson from KBA) says.

“We identified the Harunga Project as an exciting opportunity to provide a temporary platform for the precincts’ creative community. It livens the streets with vibrancy, creativity and colour. The artists involved have developed their concepts to reflect heritage and explore future visions for this creative and resilient precinct.”

A collaboration between Lifewise and Unitec, Piki Toi is a collective of artists from the street. “We may have experienced sleeping rough but are much more than that. We are illustrators, painters, carvers, storytellers.

This is a growing whanau as we work with other talented people from the streets and others who are vulnerably housed who also want to express themselves through creative media.”